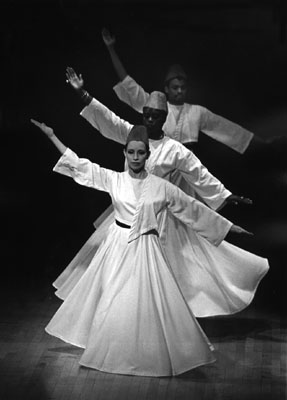 Jallaleddin al Rumi, known as Mevlaneh (teacher), was the founder of the Mevlevi sect of whirling dervish. Originally from Persia, he went to Turkey & today, the main Mevlevi mosque is in Konya, Turkey. The sect was much repressed under Attaturk’s policy of secularization, but their fascinating Sema has brought them world-wide attention & respect.

According to what I’ve seen in Turkey – I’ve never seen it in person in Iran – they start with the Teke Dede or Sheikh standing at the far end of the space.  The semazen (participants) enter, approaching him in an ellipse, bow facing him before they get to him, bow again, facing him after they pass him and sometimes kiss his hand.  They form a square with three rows of three men each and whirl in place in that formation for a bit then they move, whirling around replacing each other along the periphery, while the center whirler stays in the center.

They can feel the air flow from their heavy skirts when somebody gets in their orbit, so they know to go to the next space. The Teke Dede very slowly, very gracefully turns among them, while they’re going twice as fast. As they whirl, the right hand is up to receive from heaven and the left is down, to give to the earth.

When somebody wants to join this order, he goes through a series of very specific exercises. They put a nail in the floor – he places his left foot so the nail is between the big toe and the next one and practices raising the right foot, and then turning, while the left foot stays in place around the nail. He does this for six months, then he can try turning without the nail, then moving – proving he can stick it out, really wants to be there.

At a real Sema, first there is meditative music, mainly on a soft-sounding reed flute – what Turks call a ney, and Arabs call nai –sometimes violin, maybe oud or kanun, chanting and some singing. Often Turkish classical music is used, but slower versions, often polyrhythmic. This is where you find 28/6 and 32/7, but it’s listening music – not for dancing.  It’s not fast, so it helps create the proper mood.

Then they make the ellipse and bow four times, to the four directions, kiss the Teke Dede‘s hand, bow, walk away and turn to walk in a counter clockwise direction, then begin whirling. They spin to the left, because they believe that’s the direction of the heart. The left and pivoting foot maintains position and is symbolic of a life anchored in the Koran; the propelling and pushing right foot symbolizes life’s journey in the material world.  The right arm is up-ish and the left out to the side with the left palm pointed towards the Earth and the right palm pointing up towards Heaven. Energy from above enters through the right palm, passes through the body, through the left palm into the earth, symbolising a life caught in between. The head turns, tipped a bit back and to the right, toward the direction of the spin: this adds to the “out of body” feeling when you’ve been spinning for a while. There is no “spotting”. While whirling they chant things like Allah Hu, Allah Hu Hu (He/ Him) – one of the thousand names of Allah.  Often there are also seated chanters, who lean forward and back while chanting. It’s a religious ceremony – they’re putting themselves in a trance – it is not a performance.

Since this is a religious ritual, we would not presume to profane it & therefore only strive to show the steps a young dervish goes through in learning to whirl.

In this photo, the semazen are Djinni Hassanein, Anissa & Tarik abd el Malik.