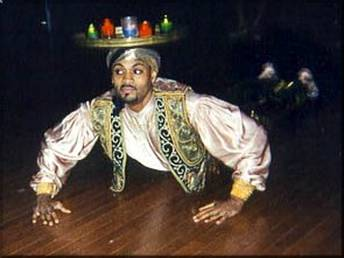 Making and serving mint tea is an integral part of Moroccan hospitality. The Tea Tray dance (Raks al Seniyya/ Danse du Plateau) is traditional, rather than folkloric. Like the Candelabrum Dance, it was started by an enterprising performer. Waiters didn’t dance around with trays on their heads in Moroccan coffee houses – just as shepherdesses never went dancing around the sheep with their staffs.

In the Moroccan Pavillion at the 1964 World’s Fair in New York City, a man named Bashir Skirij balanced three trays, of diminishing size, one on top of the other, during his Tray dance. Best Tea Tray dance I ever saw. There was no videotape back then, so I don’t have it to show you, but Lahsen, in his time one of the best professional male tray and Schikhatt dancers in Morocco, is on my #2 DVD: “The Marrakesh Folk Festival and More”. He inspired Sergio, I taught Sergio the basics and he took it from there. His Tea Tray dance is on my #1 DVD. Both DVDs are at the Lincoln Center Dance Collection. The photo is of Tarik Sultan, who also does a great Tray Dance. He had access to me, Sergio and watched my video of Lahsen over and over.

I can attest to the fact that there were just as many women as men doing it professionally in Morocco. Women wore either kaftan and d’fina (city and Schikhatt clothes!) or kaftan (cloth beledi dress) and cotton shalwar.  They wore a head scarf or a headband – never any sort of turban. Men wore either a woman’s kaftan and d’fina or, for “Moroccan Night” dinner shows, since restaurant and hotel managers felt that the tourist crowd would not understand the female clothing (they were correct), at those events male tray dancers wore shalvar and a jacket or vest. (Moroccans do not consider the kaftan and d’fina drag – it’s the appropriate dress for the dance. It’s considered drag only when there is no facial hair and full female makeup.) All male dancers I ever saw wore a kofi/ Muslim headcap.

The key to balancing a tray is to keep the head still and level: don’t bounce or do any overly enthusiastic American-style “beat the music to death” “locks” or “pops”. Practice walking while balancing the tray.

Moroccans use candles, tea glasses and a silver teapot in the center. Not teacups but the actual small glasses they use there to serve mint tea. You can get votive candles that come in small thick glasses -.just candles are more of a hazard to you and those around you, fire and wax-wise. Floorwork is involved – pretty much any moves you can do with the tray while on the floor will work.  Watch what Lahsen amd Sergio do on the floor on my #1 and #2 DVDs.