Home » Reviews » Morocco: of Will and Kismet (Al Ahram)

Like Tahiya Carioca, Umm Kulthoum or indeed La Niña de los Peines, the world-renowned Oriental dancer and dance teacher Morocco has about her the indelible mark of a diva — strong willed, courageous and earthy. Her statements are made with an authority that springs as much from an inborn self-confidence as from the profound and wide-ranging experience to which it became subject. She has performed with her own troupe at, among other prestigious venues, the Lincoln Center; and has more recently used the questions-and-answers sessions as an opportunity to inform Westerners about Eastern culture: “I will open my mouth to speak as long as I go on living.” Unassuming in appearance and profoundly generous of heart, she needs neither the flash-in-the-pan demeanour of many a contemporary performance artist nor the ladylike airs of her generation of women. Style is a word she would much rather apply to the physical language she enjoys speaking — that of dance — and into which her insights are so subtle they are likely to outdo those of even the most seasoned home-grown experts. For though a Roma gypsy of many tongues, a streetwise New Yorker and, perhaps more importantly, a well-rounded citizen of the world, Morocco remains, by birth, a cultural-geographical outsider to her vocation. Yet like newcomers to a language, Morocco has come to understand Oriental dance better and more precisely than its native speakers. 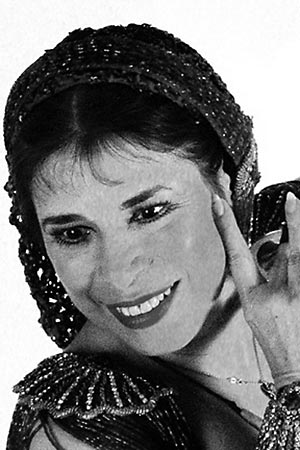 “We’re going back a long way,” she says when I ask about her connection with Oriental dance, the correct translation of raqs sharqi, “and it was by accident.” Morocco makes a point of distinguishing between raqs sharqi and “belly dance”, the latter being “an insulting misnomer used by a man named Sol Bloom, in 1893”, who sought to promote his sensational shows using exotic, out-of-the-ordinary terminology. “I was a concert Flamenco dancer with the Ballet Español Ximenez Vargas,” she begins, spinning a fascinating yarn of 1960 New York involving a Greek Orthodox priest particularly friendly with dancers, a Lebanese-Greek nightclub owner with a heavy accent, the long standing phonetic confusion between ballet and belly, and the need for a job — “to eat”. As it turns out — and in more than an hour of Morocco speaking, there is not a moment of boredom or unpleasantness — this was a relatively late point in the course of her career. As a Spanish major enamoured of the culture, she encountered, at a party of the Spanish club she belonged to, an eight- or nine-year-old girl who could work miracles “with castanettes and a long dress with ruffles”.

It was an as yet unfamiliar form of dance, but she was so compulsively drawn to it that, when she lost the phone number and address of that girl’s dance instructor on the way to her first class, she bought a Spanish newspaper and scoured the classifieds for an alternative. “And there was an ad in that newspaper for a different teacher. I called that number, I went to see her. And that was the only day she ever had an ad in that paper. Her students bought it for her as a birthday present, she didn’t even know it was there… I started taking classes in Flamenco, and then I realised that I liked this better than working as a translator or working as a teacher. So I decided to become a full-time Flamenco dancer. And the funny thing is, if I had gone to the teacher that I was supposed to go to in the beginning, I never would’ve been able to become a professional dancer, because she was a very bad teacher. It was just, you know, a hadia (gift) from God, that I lost the number and found that other number. But I didn’t know then that I was going to become a professional dancer. It’s just kismet.” 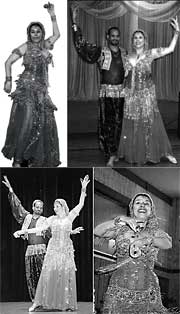 Thus began the first of many tests of determination. This was a more precarious existence, economically speaking. It was a profession on which her family was far from keen. “On my father’s side my granduncle was a violinist. But my father was a policeman, my mother was an executive secretary. And it seemed to be associated with all manner of mashakel, as Morocco herself puts it: problems. Yet her commercial translation work had proved mind-numbing. More significantly, as it turned out, in the late 1950s and early 1960s working as a dancer at a New York nightclub was, ironically, safer for a young woman than doing simultaneous interpretation for the UN, where ageing officials were constantly proffering attentions as unsolicited as they were, understandably, unwanted. Eventually Morocco travelled to the country after which she was to name herself, searching for the Berber roots of Spanish dance among the Houara Berbers of the Middle Atlas. The first of many such voyages, this was a journey Morocco had not been sure she had it in her to undertake, relying as she did on a loan from her by now resigned, if still reluctant mother, and suspicious that it would fall through till the moment she boarded the plane. By the time she heeded the priest’s call, indeed, and though she knew nothing of the sharp turn her career was about to take, dancing had become her passion and driving force, bound up with both identity and survival. For, with remarkable courage, Morocco was bent not only on practising dance but on making a living out of it. It is one feat she has most certainly achieved: “I’ve been earning my living as a dancer and a teacher and a master seminar teacher for over 45 years just in Oriental dance and from Flamenco for two years before then. That’s how I live.”

Teaching started almost as soon as practising, because it was a relatively easy way to make money and to promote a relatively new art form, especially since “at that time in New York restaurants and clubs, if you were a good girl, nobody bothered you”; it was, in other words, “very protected”. Starting in 1961, she was teaching regular classes almost continually; she did not open her own school until 1976, but since 1965, “I was teaching in somebody else’s school and I was teaching at a university”. She says she can’t compare Flamenco to Sharqi because “it’s kind of like Cajun French in New Orleans; the French people who settled there in 1500s and the 1600s speak a very different language from Parisian French. At one moment the language froze and went one way, whereas in France it went a whole other way. Flamenco came from the Moors, but because Ferdinand and Isabella threw out first the Arabs and then the Jews in 1491 and 1492, what was there of the dance froze and went in a different direction. Also it came from the Houara, which is not sharqi ; although if you see zambra mora — in Moroccan Arabic zambra means hafla, a party — it looks more like sharqi but it isn’t, because it went another way.” Gradually, over many years, Morocco found “all the basic slow movements and of course all the different hip variations, and I use them as a different vocabulary, like you learn the letters of the alphabet”. It was a slow process of inventing formal structures for a body of knowledge that had hitherto only ever been intuitively assimilated.

On that fateful evening, in December 1960 — going, in the company of her guitarist, under the illusion that she was to offer her usual Flamenco performances — she eventually discovered that what was required was something else entirely; again, a form of dance she had never encountered in her life — and one to which she was drawn with equal force. The dancer who was then performing, she recalls, was vastly inadequate. “If I can’t do better than that,” she decided, I wouldn’t be worth my salt. And so, from her first, vague attempt at copying what she had just seen, in that dancer’s ill-fitting costume, through night after night of close observation and participation, whether playing the tabla or the sagat (“I am the best sagat player,” Morocco says), to finding her way into the homes of the club’s patrons and other Middle Easterners and North Africans, she acquired astounding knowledge and skill. This was, she later realised, the beginning of the final step on a life-long journey which, starting in European dance, moved south to the Berber traditions from which Flamenco first emerged, then east to the Arab connection, the single most significant factor in the formation of what is generally referred to as Moorish culture, that Berber-Arab amalgam that was to oversee the artistic golden age of southern Spain, from whence to Asia Minor. “I didn’t realise it then, but I was going back to the roots of Flamenco. If you read in history, Roman generals who were in Iberia during the Pax Romana wrote about the dancing girls who were doing what sounds like sharqi, from the way they describe it.” It sounds like a roundabout homecoming.

Different families gave her different versions of the same story, however — the traditions, customs, styles of movement, rhythms, occasions on which a particular dance is performed, for how long and to what music — the information was endless, for, notwithstanding some general defining characteristics, under the general umbrella of raqs sharqi lies the almost infinite variety of shaabi, or popular dance. One interesting encounter was with the banat (daughters of) Mazen – Sinti gypsies of Upper Egypt: “In 1978, the man I was married to was a photographer, and he took pictures of Khaireya Mazen and me; we look more like sisters than I look with my own sister, or she does with hers.” Elsewhere she was to develop enormous understanding of these forms. “Because I’m very curious, I wanted to know everything. Which is the true story? And when I started travelling I realised there isn’t one truth. They were all telling me the truth.” And she’s doing so with such passion, she finds herself anachronistic in an age when “Everybody is trying to be like it is somewhere else”.

In the last 25 years, she says, more things have changed or disappeared than in the previous 2,000. She happened to start dancing during the golden age of Oriental dance, and on first coming to Egypt in 1964 made friends with such icons of the form as Samia Gamal, Tahiha Carioca and Zeinat Elwi, then a whole new generation that included Nagwa Fouad, Nadia Hamdi and Suheir Zaki. “And I worked with Lyn and Lys, in New York, with the Gamal twins. I worked with them in America.” Gamal was “in a lot of ways, for me, the better dancer”. But it is, predictably by now, to Carioca’s personality that Morocco looked up. “She had more variety and more intellect. And,” she pauses momentarily, “I don’t know how to say it politely: she didn’t take shit.”