A wonderful weekend of fun and adventure began when 14 dancers from Seattle, including Troupe Baklava, traveled to Vancouver, WA, for a Morocco workshop and the show “Midnight Oasis”, presented on March 26th at the Green Meadows Country Club by Halima, Chandi Boutique, Azaleea, Calysta and Salaam Music. The fun was traveling with my fellow troupe members, and 10 of us staying in two connecting motel rooms. Needless to say, we didn’t get a lot of sleep. The “adventure” was trying to find our way through the countryside of southwestern Washington and northwest Oregon in driver Zeeta’s van.

We received a warm welcome Friday night at a potluck and video party given by Azaleea in her home in Milwaukie, OR. Saturday morning we set off for another adventure – finding the county club! We discovered that when in Vancouver, if your blink, you will find yourself in Oregon. There also seemed to be an unusual number of missing road signs. The effort, though, was certainly worth it. Morocco’s workshop, attended by 65 dancers, gave us a full day of dance instructions, plus several vendors to shop with.

Morocco, who is truly an authority in her field, brings a sense of history and depth of understanding to Middle Eastern dance that should make her workshops a “must” for any serious students of the “danse”.

We began with a thorough warmup, and, in the morning session, worked on shimmies, hip articulation, and traveling steps. All during the workshop, Morocco was teaching us individual steps and the same time giving information on Middle Eastern dance, as well as being her usual energetic and witty self. She demonstrated an incredibly fine, subtle shimmy which she compared with walking where there is an earthquake while singing Carol King’s “I Feel the Earth Move…” she then demonstrated the proper use if arms and gave an amazing demonstrated of her pectorals. We were given a number of steps to use, then danced to the “Moon Over Cairo” tape by Ibrahim Samahy, Morocco said this gave us a basic vocabulary to choose from for dancing to live music; something with which to respond.

In the afternoon session, she explained three different types of 6/8 rhythm, Persian, Iraqi and Moroccan. Including was an explanation of their clothing /costuming and how it relates to and effects these different styles. We finished off the afternoon by learning a choreography for a Persian 6/8 dance to a Jalaleddin recording. It was a lovely experience dancing this choreography along with 65 other dancers!

Morocco’s workshop in Vancouver was inspiring, giving us a new depth of understanding of Middle Eastern dance, dance ethics, and ideas that each of us can apply to our dancing.

On March 26th, at the Green Meadows Country Club in Vancouver, WA, we were transported through time and space to the “Midnight Oasis”. The stage of the nicely decorated ballroom included a tent, palms and Oriental carpets that added to the desert setting. Announcer Cheryl Palmer was our guide to the evening of entertainment provided by sponsors Halima, Chandi Boutique, Azaleea, Calysta and Salaam Music. The show consisted mostly of local dancers and starred Morocco, who had given a workshop that day.

The live music of Aimon and Manon (Salaam Music) was danced to by most of the performers. These two very pleasant, dedicated musicians played lively, authentic Middle Eastern music which really helped set the stage for the show.

The Al-Ghawazee dance Troupe opened the show with an energetic dance using finger cymbals, Dressed in Ghawazee style coats with camel bells at the hip, they did several dances to taped music. One dance, done with tambourines, had a gypsy flavor. This troupe, unfortunately the only one dancing that evening, really helped get the show off to a good start.

The next dancer, and one of the show’s sponsors, was resplendent in her teal and gold costume made in Egypt by Madame Abla. Azaleea’s flowing teal cape of tissue lame served to emphasize her graceful arms and hands. It was just one of many beautiful costumes of the evening, several of which were also Egyptian originals.

Included in the first act of the show was the setting for the main theme. This was provided by dancers Amara, Calysta, and Michael who not only danced but then became part of the stage setting. Michael, the only male performer, was coaxed out to dance by Calysta in a flirty way. Michael had good reponse from the audience to his decidedly masculine style of belly dance.

Aura, member of Troupe Baklava from Seattle, moved well over the stage with her graceful, bouncy style.

Fatima, of Sacramento, dazzled us with her unique costume of crocheted paillettes.

The first act closed with Morocco doing a Saidi cane dance. Dressed in a black baladi dress, dripping from head to toe with gold beads, she danced to taped music which included a really fast drum solo. During the drum she did exquisitely fine shimmies while balancing the cane on her head.

Barbara Sellers began the second act dressed in modern dance clothing which empahasized her strong and unique athletic style. She finished her routine combining her athleticism with folksy steps to a 9/8 rhythm.

There were so many solo dancers during the evening that it becomes difficult to do them all justice in the space of a short article. There were many excellent dancers. Some high-lights included Zeeta’s energetic, well-articulated drum dance. Her movements were certainly emphasized by her hot pink lace and fringe shimmy dress. Aurelia looked soft and lovely in a pink and white confection while doing her trademark backbends. Mezdulene did a fine double sword, perfectly.

Morocco closed the show with a Raks Sharki. dressed in a unique Egyptian cabaret costume of deep blue with a silver star design. This was an unforgetable performance, the type that brings tears to one’s eyes for the effect of such beauty, and was received with a standing ovation from the audience. After the curtain call. Morocco came back and did a Saudi dance to live music, and finished with a drum solo.

In all, it was an enjoyable and entertaining evening. I’ll be looking forward to future Midnight Oasis productions.

Graphics compiled/prepared by Lynette Harris, editor of Gilded Serpent Karima Nadira writes: “In June, 2003, I was privileged to assist Morocco in the videotaping of this interview with Mahmoud Reda. When we arrived for the interview, Mahmoud Reda... Read More 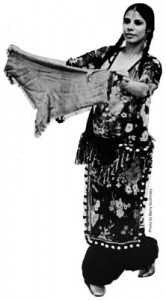