Danse du ventre, or, to use the deliberately coined American misnomer, belly dancing, is not at all what Western society thinks it to be, i.e. a dance of sex and seduction. This is an erroneous and ignorant belief, reinforced and perpetrated by stage and movie writers too lazy to do research. Neither is it a ‘belly’ dance, since much more is involved than just the stomach muscles.

Oriental dancing, as the Arabs themselves call it, is one of the oldest forms of dance, originating with pre-Biblical religious rites worshiping motherhood and two of its movements (the only two actually done with the abdominal muscles) have as their practical side the preparation of females for the stresses of childbirth. Thus it is also, in a way, the oldest form of natural childbirth instruction.

According to Farab Firdoz, a dancer from Bahrein, Saudi Arabia, this use of the dance was still performed in the less Westernized parts of her country in the ’50s, around the bedside of a woman in childbirth, by a circle of her fellow tribeswomen. In this ritualistic form men are not allowed to watch it. The purpose here is to hypnotize the woman in labor into an imitation of the movements with her own body. This greatly facilitates the birth and reduces pain from womb contractions. It helps the mother to move with instead of against the contractions.

Unfortunately, Western civilization brought a sick eroticism to the Middle East along with its technical advances. In The Dancer of Shamahka, Armen Ohanian says:

“Thus in Cairo one evening I saw, with sick incredulous eyes, one of our most sacred dances degraded into a bestiality horrible and revolting. It is our poem of the mystery and pain of motherhood, which all true Asiatic men watch with reverence and humility, in the faraway corners of Asia, where the destructive breath of the Occident has not yet penetrated. In this olden Asia, which has kept the dance in its primitive purity, it represents maternity, the mysterious conception of life, the suffering and the joy with which a new soul is brought into the world.

“Could any man born of woman contemplate this most holy subject, expressed in an art so pure and so ritualistic as our Eastern dance with less than profound reverence? Such is our Asiatic veneration of motherhood, that there are countries and tribes whose most binding oath is sworn upon the stomach, because it is from this sacred cup that humanity has issued.

“But the spirit of the Occident had touched this holy dance and it became the horrible danse du ventre, the hoochie-koochie. To me, a nauseating revelation of unsuspected depths of human bestiality, to others it was — amusing. I heard the lean Europeans chuckling. I saw lascivious smiles upon even the lips of Asiatics, and I fled.”

Generations of Bedouin and Berber mothers may have to bear their young not only without benefit of hospitals and modern antiseptic methods, but also without the comfort and muscular aid of what is definitely an ancient folk ritual. This is because even some Arabic people are now beginning to see sex in what is simply a gymnastic exercise for a natural function. As a result, the ritual is slowly dying out.

Other peoples, among them the Hawaiians and Maoris of New Zealand, have had their own chidlbirth preparation dances involving pelvic and abdominal muscles. The Hawaiians used to have a hula called “Ohelo”, that was done in a reclining position, by both sexes, every morning. As late as 1936, the Maoris still practiced their form if this exercise.

A small subsect of the Allaoui Moslems believe that the Messiah will be born to a man, since woman is unworthy of such a high honor. Under this supposition, the men in that sect practice Oriental dancing in preparation for the honor to be awarded them someday, that of giving birth to their Deliverer.

The idea that children must be brought forth in pain is a religious one, based on the Christian concept of original sin and the penance to be exacted for it. The Bible states, “In sorrow thou shalt bring forth children”. Nothing is said about undue or excruciating pain, and yet the thought of agonizing birth pangs is pounded into our heads from the earliest age of understanding. Thus, childbirth is approached with bodies & muscles tensed in fear and anticipation. Instead of relaxing and helping nature along, we put stumbling blocks in her way.

The newest idea in obstetrics today is to prepare pregnant women for the coming ordeal either through hypnotism or special training classes. They can now be ultra-modern and still give birth the “natural childbirth” way. Doctors have recently found that babies born in this manner come into the world more alert and without the common anaesthesia-induced torpor.

What hypnotism accomplishes, although temporarily, is the gradual removal through post-hypnotic suggestion of the whole mental concept of painful childbirth. The relaxed woman can now concentrate only on helping nature by moving with the contractions of labor.

This self-same thing is accomplished by the circle of dancing Arab tribes women who hypnotize the woman in labor into imitating their rolling pelvic motions. Their task is far easier though, since there is no unfounded and exaggerated fear of childirths pains in primitive societies.

Who would think of sending a man who has a sedentary job to run in Olympic races? Why then does Western society expect a woman, who has never used her pelvic muscles for more than just holding up her garter belt, to give birth easily, a feat more taxing for the muscles than any athletic competition?

Childbirth must be prepared for. Dormant muscles must be built up little by little, step by step. All it takes is a little work, which certainly would never harm the mother or the unborn child. Strengthening the muscles also helps in carrying the child through pregnancy and greatly reduces stretch marks on the abdomen.

Training classes, such as Education for Childbirth courses given at one of the major hospitals in New York City, try to accomplish in a few short months or weeks what should have been started in childhood: namely the shaping-up of pelvic muscles used in pregnancy and childbirth and to regain shape and muscle tone after birth.

The first lesson in the Exercise Review Sheet of that hospital says: “Concentration Exercises — Object: to learn muscular control of muscle groups. Particular attention is paid to strong contraction and absolute relaxation of the rest of the body.”

The technique of Oriental dancing is one of contractions and releases while all other muscles not involved in the movemen are relaxed.

Class 2 goes on: “Stand with knees easy, feet parallel and with the weight of the body well over the arches of your feet. Rock your pelvis upward, Tighten slowly your buttocks and lower abdominal muscles. . . Lying on your back, with legs bent, press back firmly on floor, contracting abdominal muscles at the same time — release.”

This is a position assumed in almost every Oriental dance at one point or another, where the head reaches the floor from a backbend and the body relaxes untill the spine rests on the floor. The knees are sharply bent and the feet outside of and close to the thighs. Slow rhythmic breathing is followed by fast shallow breathing, acceleration of which increases with contractions, producing a variety of abdominal movements.

One of the women, who attended classes of this sort, was the wife of a prominent lawyer of Turkish background and mother of twins. She told me that one of the movements her obstetrician stressed was a rippling movement of the abdomen, the old Arabic “belly roll” – what we now refer to as the “camel”.

It was explained that the upper part of the wave, as her doctor termed the movement, was to be done between the contractions of the womb, and the lower part of the wave, or bearing down, was to be done as the womb contracted. This would aid the mother considerably in expelling the baby with minimal wear and tear on all the internal organs and muscles involved. Fighting the contractions through fear and preoccupation with the thought of pain would only tense the muscles and tear them rather than allow them to stretch gently during the uterine contractions and relaxations.

The rolling movement itself is no childs play to learn, for when done wrong it only serves to stetch the stomach muscles. The lower spine, pelvis, diaphragm and abdomen are involved. This is extremely difficult to describe in writing & must be demonstrated, explained step by step, felt gradually muscle by muscle.

Each little muscle must be found and developed in turn, before the whole can be manipulated to the extent that each split second can be perfectly controlled. Rather than sharpness and angularity, there must be a smooth, circular, undulating motion.

Fortunately, the Turkish backround of the woman I mentioned gave her more than just a laywoman’s knowledge of Oriental dancing and therefore a greater knowledge of and control over her pelvic muscles. Subsequently, she learned all the exercises with greater speed and facility than the average female produced by a society that is just discovering its hips via some of the newer social and Latin dances.

These are muscles that have been used by almost every Arabic and Turkish – speaker (and many others) from childhood on up, in the execution of some of their indigenous folk dances: vulgarly and wrongly referred to in Western society as the danse du ventre or, worse yet, belly dance.

Dear Readers:
The amazing experience I described in “Roots” occurred in 1967 and I wrote about it in the early ’70s. (“Giving to Light” is a 1996 edited version of “Roots”. ) Subsequent research and “in culture” experience led me to realize that it was not specifically Raqs Sharqi they were doing, but Schikhatt – a Moroccan dance (called Medahat in Algeria).  Schikhatt’s hip movements are much stronger than Raqs Sharqi’s and it has almost none of Raqs Sharqi’s slower movements, but they are related ethnic dance forms. 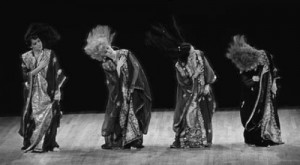